What to Expect From The Future of Advertising 2018

Posted in News, tagged with Events, Future of Advertising, on February 28, 2018

So, what is the future of advertising?

Now you can find out! The Future of Advertising is coming up on the 7th March, at  Picturehouse Central in Piccadilly.

We have eight quick-fire sessions, designed to inspire our audience in their future thinking – most importantly on how they evolve their own businesses to best exploit new opportunities.

The FOA is an annual event that we started 12 years ago as an antidote to conferences – too expensive, too long and usually a mixed bag relevance wise. We have evolved from a somewhat tech and new project focus to an eclectic mix of speakers, with the emphasis on big thinking.

That is particularly true this year, where else would you hear from such a diverse spectrum of big subjects?

We’ll be starting with the founding trio of Uncommon; Natalie, Lucy and Nils. They’re the most eagerly anticipated agency start-up for some time following their success in transforming Grey, so they’ll be talking about why they decided to leave, how they applied their skills to deciding what they did and didn’t want to do in creating a new agency, and what makes them unique in a market obsessed with the newest thing.

Contagious have been regular contributors to the FOA – as the leading publication on new tech and new trends in advertising, exposing the most groundbreaking projects in the creative industries, their talks always provide a great overview on all things new. This time it’s Head of Trends Katrina Dodds who’ll be focusing on how brands need to be working harder to break toxic male stereotypes in this age of progression.

Mr Bingo is a former commercial illustrator turned artist. He’ll talk a bit about communication and promoting yourself online, working with tricky clients and his unique take on chasing payments. But mostly he’s just a brilliantly funny speaker who we had to invite to talk! Might not be the most relevant speaker on the list, but he promises to be interesting and stimulating.

Leila Fataar is the founder of Platform 13 (previously working with big names such as Diageo, Edelman and Adidas Originals) who now champions established talent in the worlds of music, art and fashion through her agency, rather than the social media influencers marketing is currently so obsessed with. She’ll be schooling the audience on how brands can navigate their way through the transitional times we’re currently in, to make work that actually impacts on culture and discussions.

OK, we have some creative tech, this year from Liam Walsh the Creative Technology Director of Interactive Arts at Nexus Studios. Liam is a multi-award winning innovator, known for pushing the boundaries of possibility and a dedication to harnessing emerging technologies in service of engaging story experiences. He’ll be talking about the opportunities that lie ahead for advertisers, and how production companies can make sure they’re a part of it.

Commercials now means advertising films for any media, and the biggest growth area continues to be the internet. Of course there have been some challenges along the way – robots watching ads, ads placed with unsuitable content and viewer engagement, but with all of us glued to screens in every waking moment now, the internet is a critical means of reaching consumers and James Chandler from the Internet Advertising Bureau will explain the common mistakes we’re all making, and what we can do to instantly improve our digital output.

Exploring the future of advertising from a completely different angle is Jillian Gibbs, founder and CEO of APR. As the largest advertising consultancy, APR represents major brands who collectively spend millions of pounds on advertising every year. As such, Jillian has a unique vantage point as to the thinking of an advertiser, and is invited as part of our mission at the APA to help members understand procurement better, and communicate to procurement how to get the best value production – get three APA members to bid for the work on the open market!

Steve Henry is an advertising legend. I can say that with authority having watched a tribute to him when he got a lifetime achievement award at the British Arrows and the reel of commercials he had worked on was played – practically every brilliant commercial made over the long period was on it. Steve has moved on successfully to a new mission with Decoded – teaching anyone to code in a day, which he sees as a key to education and the workforce we need. Steve is going to give us an oversight as to how he sees advertising changing, why we need to keep being disruptive, and the new opportunities for those who are willing to take some risks.

If you’d like to attend the Future of Advertising then you can buy your ticket by emailing [email protected]. Tickets are £75 plus VAT and the event will run from 12-5pm Wednesday 7th March at the Picturehouse Central. 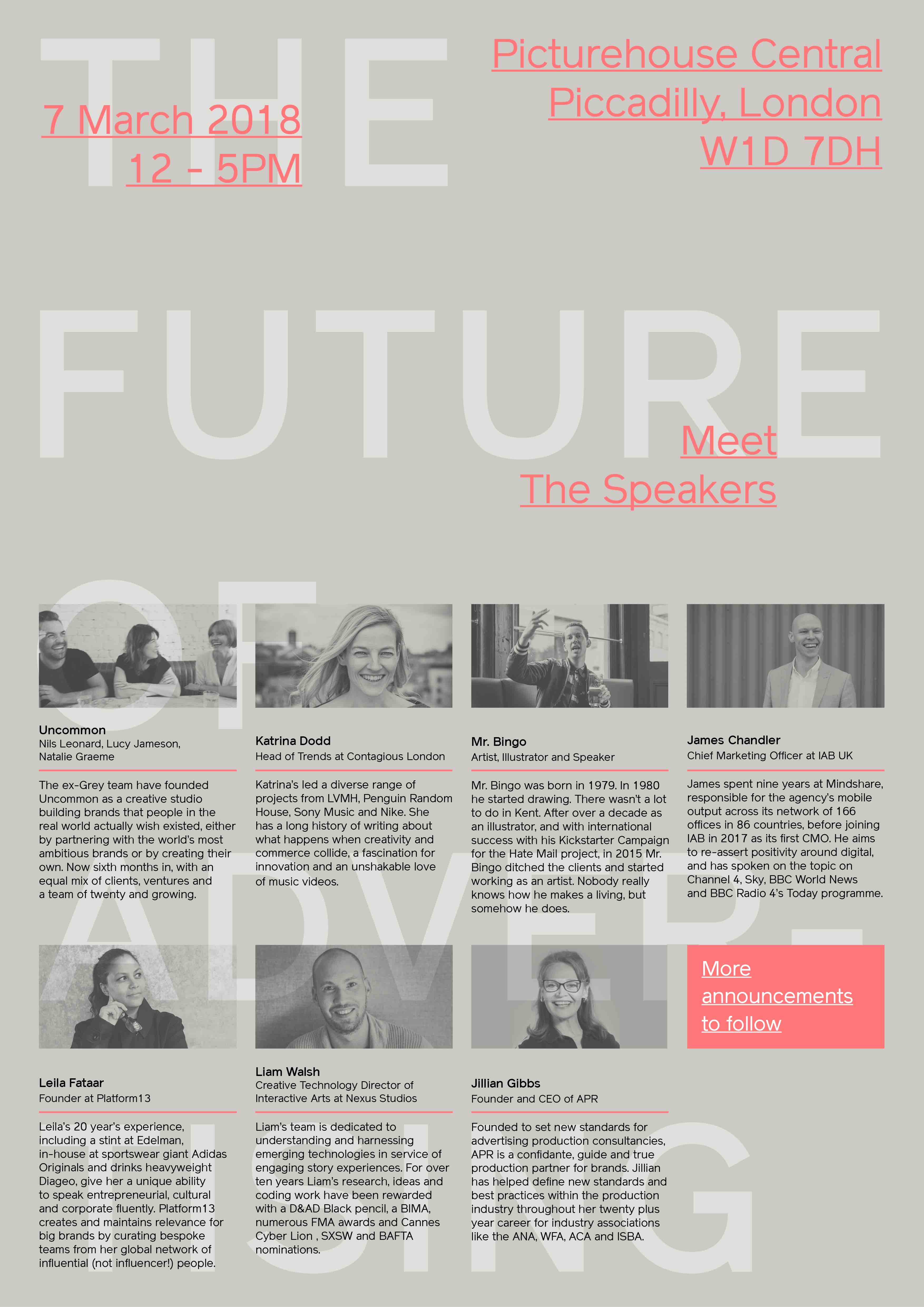