The 2016 Future of Advertising event at BAFTA earlier this week, saw the launch of the APA’s first Interactive, Digital and Experiential Advertising Showcase (IDEAS)

Steve Davies reflects on the showcase’s conception, “We went to Shanghai last year with a number of APA members. Agencies there were interested in commercials production companies and of course their directors (a market that is still showing growth) but they were even more excited about interactive and experiential work. They want to be offering it to their clients but don’t have the expertise there to do so, which is presumably true of many other markets around the world.”

He adds, “London is creating brilliant and original interactive and experiential work and we want the world to see that and know that they should turn to London for that work and of course, who to turn to as well. We can then take the showcase around the world to do just that.’

He further comments ‘We also felt that interactive/experiential deserves it’s own event and whilst there are some well established UK advertising events for commercials there wasn’t anything specifically for these disciplines/formats.’

The showcase encourages all sorts of interactive and experiential work, including the ever-evolving VR format. The showcase features short case-studies, explaining an advertising campaign or project that isn’t purely film based. This lends itself to an exciting array of submissions

One of the showcase’s fourteen judges, Ed Hornby (Director of Digital Delivery at VCCP), comments ‘The breadth and quality of the work we saw is inspiring; some of it could be classed as works of art. VR and AR played a dominant role, as did physical/digital experiential installations’

He adds, “The more we point at the very best work, the greater our expectations become and the more opportunities appear to achieve them.’

Fellow Judge, Chris Williams (Group Creative, Director at R/GA) also muses, ‘There were some outstanding pieces of work, which went beyond the norm, creating experiences which defined new ways of engaging audiences.’

The Winners of this year’s IDEAS are:

Google ‘Made with Code: Holiday Lights’

Honda ‘The Other Side’

Notes on Blindness ‘Into Darkness’ 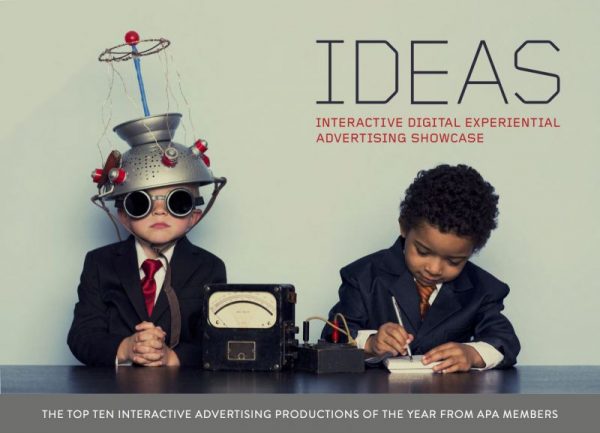