How much money will advertisers spend on advertising in 2016, on what and what does it mean for APA members?

Predicting how good the advertising market will be for the year ahead is difficult, with data showing the macro picture and ignoring factors that have a major impact on your business, particularly competition – and this year with the added issue of agencies undertaking some production in house, threatening to erode the market for independent production – and post and editing – companies.

Nevertheless, trends in ad spend and the economy are interesting because they are an indicator of how we are likely to find the year ahead and everyone in advertising/commercials production is more likely to prosper in a growing advertising market than a static or shrinking one.

According to the World Advertising Research Council – WARC-

“Global adspend is expected to increase by 4.4% in 2016, according to Warc’s latest International Ad Forecast. This projection is double the estimated 2.2% increase in global adspend seen in 2015 and equates to US$414bn at current prices.”

The US and China, the world’s two largest advertising markets are predicted go grow at the rate of 4.9% and 6.9% respectively and WARC predicts UK ad spend will increase by 5.7%- marginally less than 2015 but still a very good (predicted) performance for a developed economy.

Consecutive years of ad spend growth in the UK of 5.8% and 5.7% present a very strong performance. In the UK, the biggest growth over the past 12 months was in ad spend on the internet, some of which is commercials/film based of course of 13.3% but the second highest growth medium for ad spend was TV commercials, up 7.1% over the past 12 months! Spend on TV commercials is forecast to increase by 5.4% in 2016, with total UK TV advertising expenditure forecast to be £6 billion this year.

These predictions are supported by WPP Chairman Sir Martin Sorrell’s predictions for the year ahead. He sees steady and strong growth in advertising markets worldwide, in line with the predictions from WARC.He sees the major sports events this year and particularly the US election as being good for advertising ( he doesn’t think Donald Trump is going to win). Sir Martin is one of the few people not to offer a firm opinion as to whether a Brexit would be good or bad for the economy and advertising.

That might reflect the experience of the Advertising Association board that I attended recently, where the view was taken that the issues were too complex and unpredictable for the advertising industry to seek to find a unified position on Brexit.

Sir Martin sees continued growth in India and China, with his view of the problems of the latter as short term and strong growth in Latin America.

He sees major client mergers, like AB InBev and SAB Miller creating additional pressures on the ad industry- because those mergers are only judged a success if the create major cost savings.

So very positive data for the UK and for global markets and we will be continuing to make the case that creating advertising/commercials that are relevant and impactful is critical to ensure that advertisers money is well spent and that the expertise on offer from APA members is the best for advertisers and agencies to achieve that. 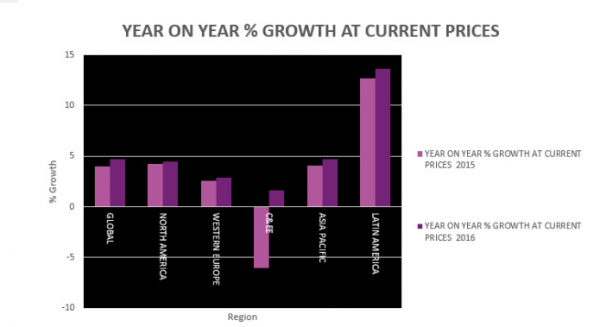